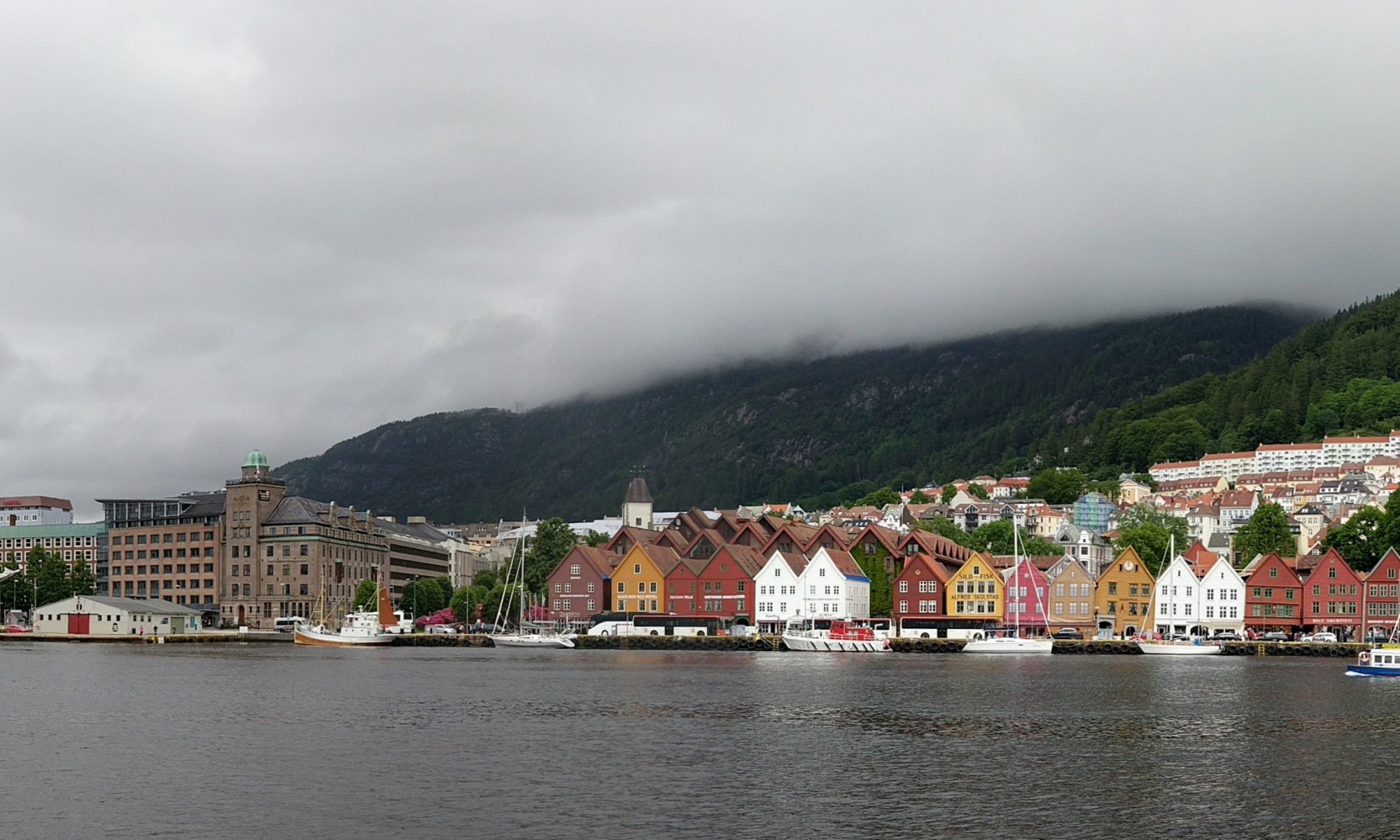 Flying from London Heathrow to Norway was easier than I expected, once I could negotiate Terminal 5 with a bike box. Unpacking and reassembling my Thorn Sherpa in the baggage lounge drew stares, but not as many as I exited Customs dressed and prepared for the next 4,000km of my journey back to London. A surreal scene. 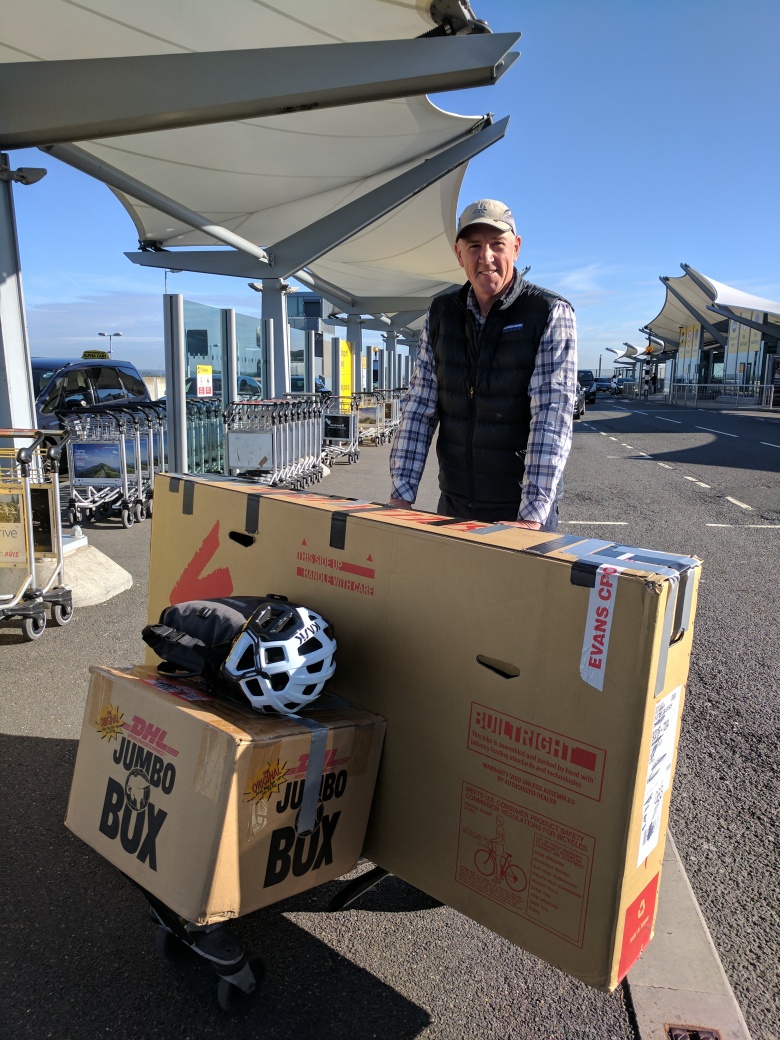 I had no idea where I would stay that night, but the first task was to find the Hanseatic quayside at Bryggen. This set of buildings marks the start of the North Sea Cycle Route, continuing south and around the coast of Norway towards the Oslofjord. Encouraged by the quality of the cycle paths and roads, I pedalled all the way to the Hahljem and caught the ferry. 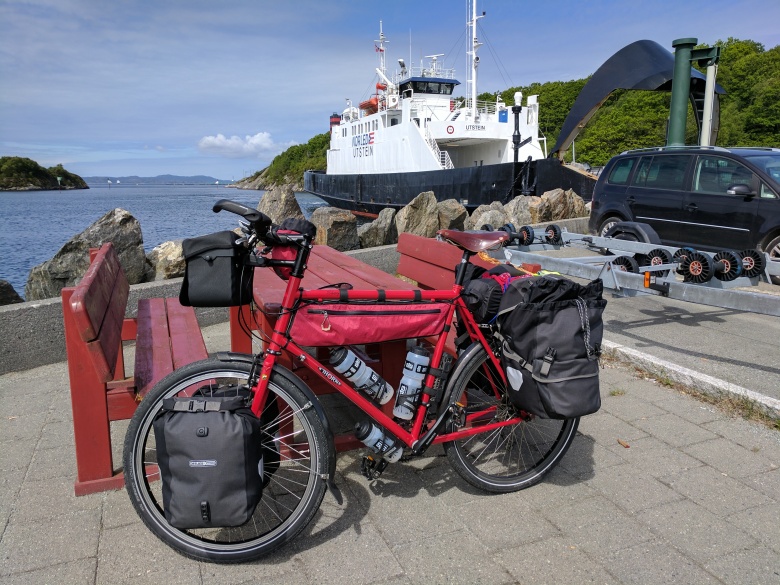 It was then only a few miles to Fitjar and a deserted campsite, apart from a French cycle tourist. The midges were swarming, so I spent a few hours chatting in the communal kitchen about cycle touring and the route south. Cycling 100km in half a day bodes well for the task ahead. 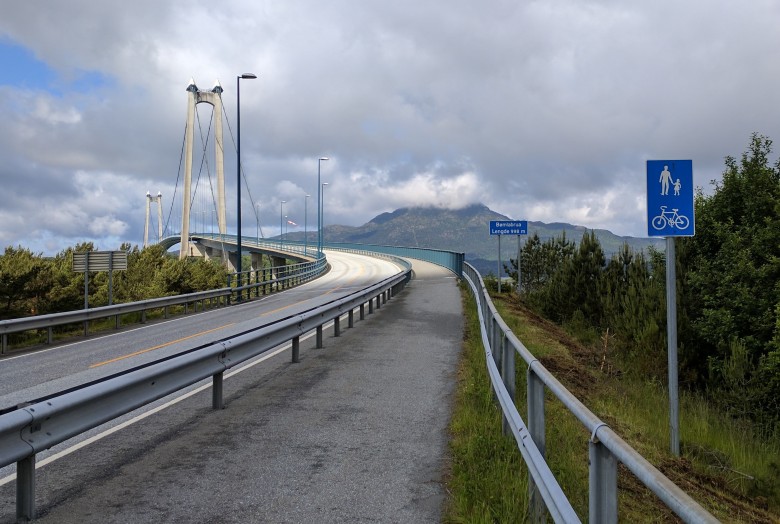 The roads and cycle paths are a revelation, beautifully smooth and guiding you through the quiet wild coastal scenery of Norway. Every summit reveals an unspoilt landscape of forest and fjords, peppered with local Hutte (huts) that serve as a wilderness retreat for many Norwegians. Campsites are great and an opportunity to meet fellow cyclists. These could be found using Google Maps on my smartphone, which now has good 4G signal and free data wherever I go, thanks to the new roaming regulations and superb Norwegian mobile network. 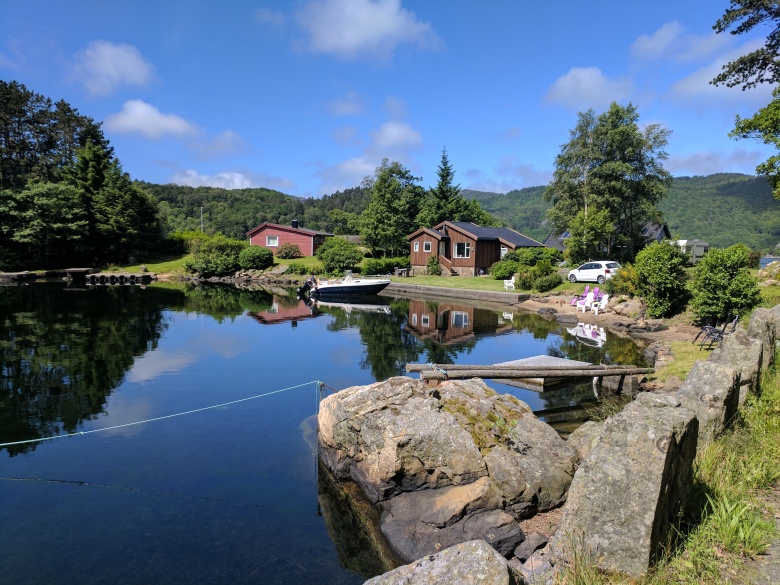 I have written a separate blog on the ferry journeys, as these need to be carefully planned to avoid impossibly long detours. Many crossings are discontinued in favour of new road tunnels, which cannot be used by cyclists. The only option, in this case, is to catch a bus or train, but fortunately, the NSCR follows tunnel free routes. I took a shortcut on one section that looked fine on the map, but a tunnel appeared after a long ascent. Several mountain bikers passed me earlier, so I knew there was a way around and I was very fortunate that the old mountain path was still in use. This serendipitous route leads to a close encounter with a White Tailed Sea Eagle, soaring overhead. 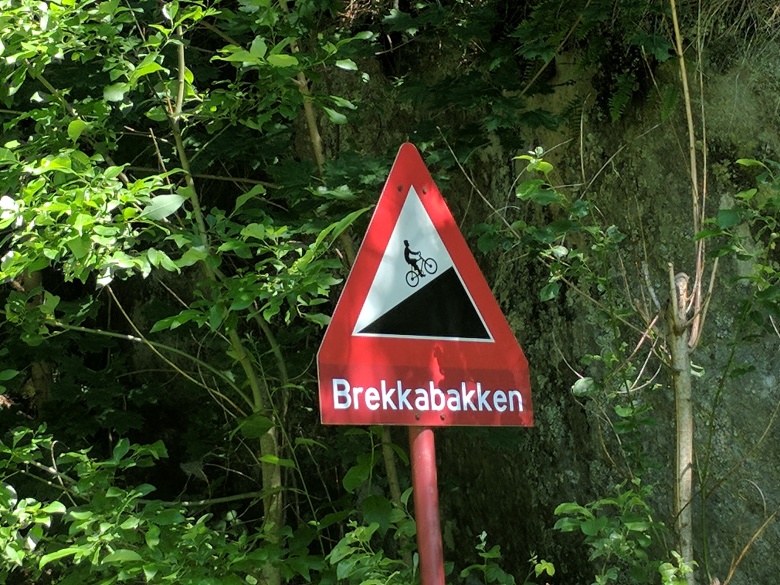 I arrived in Stavanger a day after staying in Haugesund to torrential rain and a bottom bracket that was making unhealthy noises. I found a cycle shop still open until 8 PM and a mechanic happily replace a broken shim to get me going again. Forever grateful I cycle south across a landscape of dairy farms and arable crops until reaching a punishing rough track climbing and descending into Egersund.  The local sign for steep ascent is Brekkabakken – how true.

Now into the mountains, with a series of steep ascents and exhilarating descents down hairpin roads. The Thorn is handling superbly; I lose height faster than the traffic, loaded with camping gear. At one stage I bank over around a 470-degree bend. Yes, one full circle and then a tunnel under the road, I had to draw it out to work out that angle. 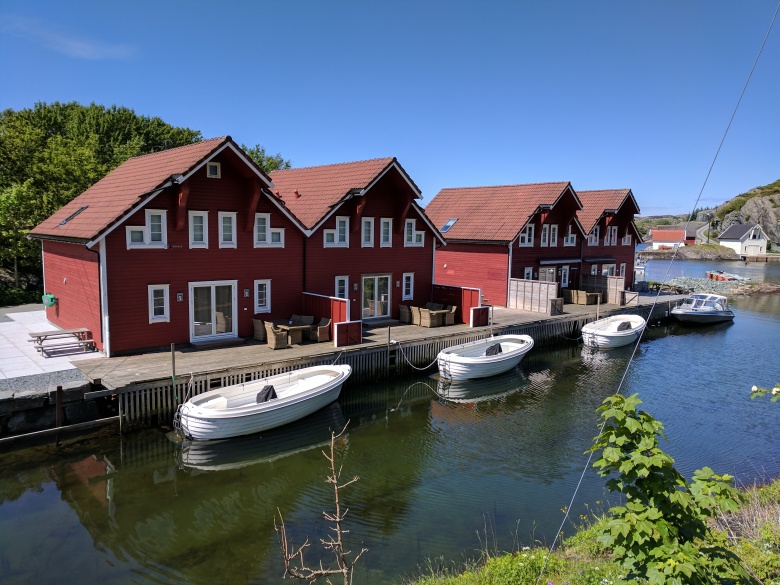 I meet a young student from the Czech Republic, cycling home after an Erasmus year in Trondheim to Brno. He has built a bike for $25 with second-hand panniers but is much fitter than me. We spend a day together as we ride into Kristiansand, where he catches a ferry to Denmark. My route continues northeast towards Oslo. 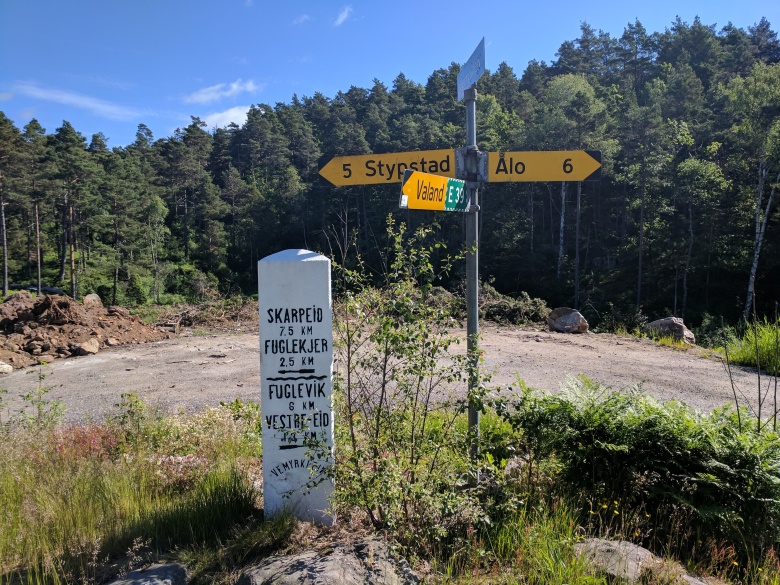 The picturesque inlets and ports follow, one by one to a lovely campsite at Gjeving. Endless pleasure boats and spotlessly maintained hutte. The national pastime in Norway seems to be using a lawnmower. Each green lawn is immaculate, including the ones cut by battery-powered Husqvarna robots. It seems almost everything here runs on electricity, the endless procession of Tesla’s, Nissan’s and Toyota’s. Everyone seems to have an electric bike, which becomes apparent as I am regularly overtaken up the hills, by grannies with a full load of shopping. I will later learn to draft the e-bikes in Holland and Germany. 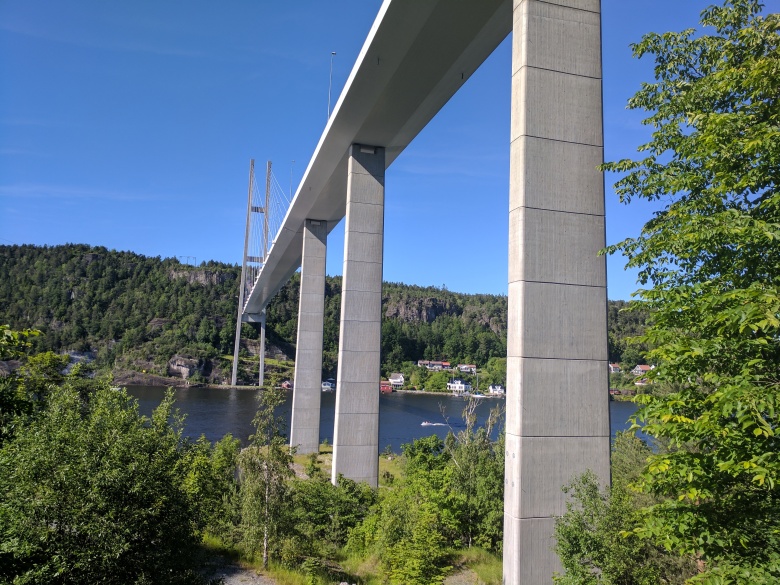 There is a correlation between the midge population and the quality of the landscape, the more beautiful the scenery, the higher the density of midge clouds. Moving at speed on the bike avoids the bites, but makes good glasses essential. The roads are perfect and quiet as I enter Lillesand after a high-speed descent from Birkeland on excellent smooth cycle paths. The campsite at Gjeving is a delight with an on-site Thai food stall. Expensive, but delicious. 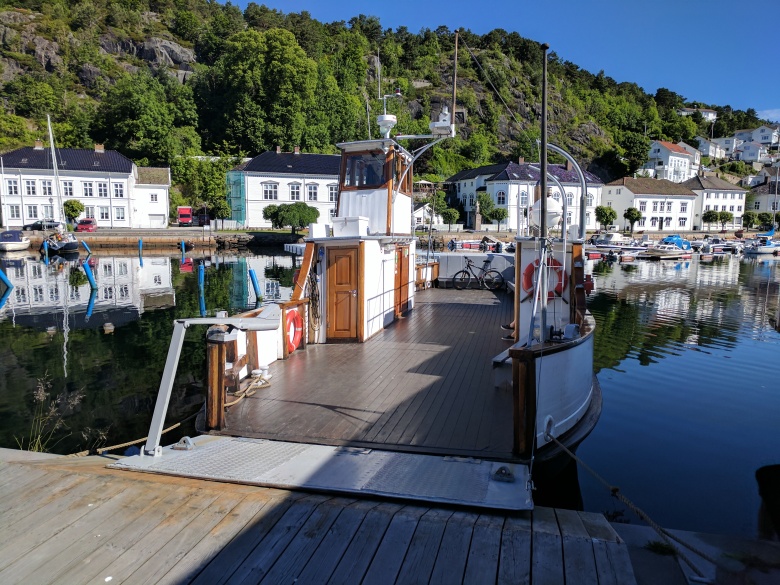 A 60-year-old wooden ferry Risør brings me towards Stabbestad and another crossing to Kragerø. Like a car always meeting green traffic lights, my ferry timing is perfection and yet unplanned, saving a considerable amount of time. After an overnight stop at Eidanger a full day of rain, the first for a week, brings me to Høsoy and the expectation of a ferry long since discontinued. A fisherman directs me to a lovely campsite for my last night until I catch the ferry from Morten to Hoss across Oslofjord.

I am still in Norway, judging by the windsock like flags on every hutte as I head south towards Sweden. I arrive at Fredrikstad and cross by ferry to the Fortified Town and a campsite, full of Taekwondo contestants competing at a local sports centre. It is raining hard again, but the following day brightens as I cross the border into Sweden, standing astride the road markings on a substantial bridge across the Svinesund fjord. 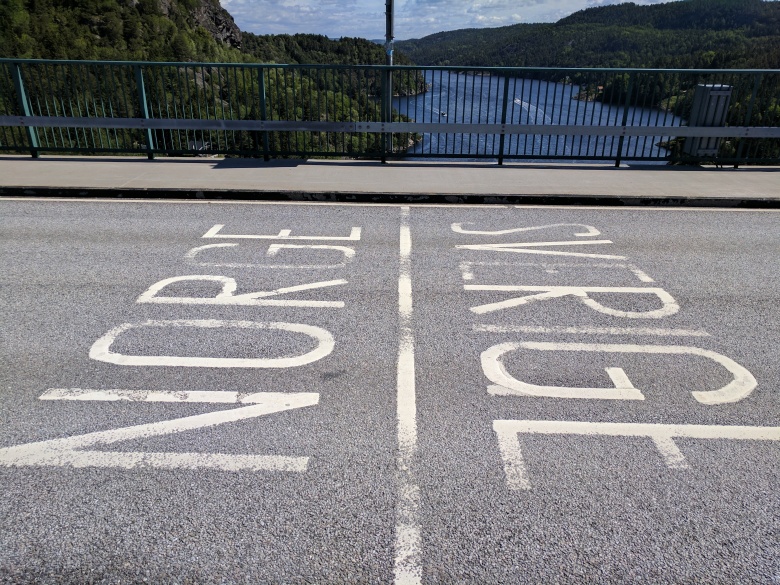 It has taken me just over ten days to cycle from Bergen. I have been blessed with great weather, apart from a few days, cycling on some of the best cycle tracks I have ever used. I must come back soon.