My original idea was just to cycle the Wild Atlantic Way (WAW) in Ireland, catching ferries from Fishguard to Rosslare and from Larne to Cairnryan. But why not follow the Atlantic seaboard from Lands’ End to Cape Wrath and then extend it to John o’Groats too?  Part 1 and 2 cover England and Wales, now into the meat of the ride.

After an uneventful ferry journey and nice campsite at Tagoat, I set out for the start of the WAW at Kinsale. Along the country lanes I immediately notice I am getting the finger from local drivers, but not the f’off sign I get back home, but the inverse – a gentle acknowledgement and welcome.  This is pleasant cycling as I follow the new Eurovelo 1 signs through gentle remote farmland.

The ferryman at Ballyhack collects €2 and transports me to the opposite bank of the River Barrow and into Country Waterford. The car registrations confirming what the boundary signs tell me. It is a brief cycle to a cafe in Waterford Quay for lunch, before I connect with the Waterford Greenway – a traffic free cycle route along a rail line to Dungarvan. The route is easy under wheel, but hard going into the wind. I have to give way to a tourist train that runs parallel to the cycle path, full of warm cosseted passengers. 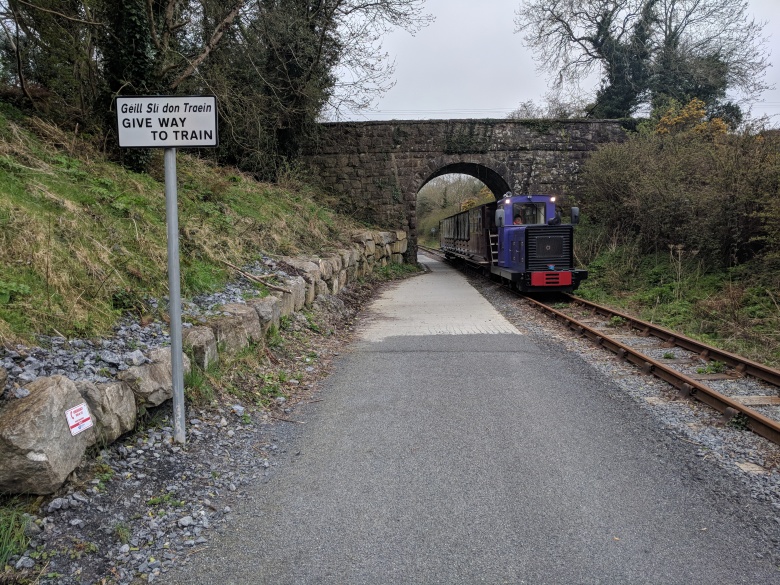 The sea comes into view after passing through a tunnel, decorated with pixie like carvings by local school children. I stop to check directions and meet Jack and Sonia again, a couple I met on the ferry. We cycle together to Caseys campsite and are made most welcome by the owner, busily preparing the site for the summer season.

The next section to Kinsale keeping to country lanes is not so easy. It is raining hard too. I see the N25 has a good shoulder and decide to cycle along that to see where it takes me. I switch on all my LED lights and enjoy the draft of lorries. The cycling is mostly safe other than some difficult sections where the planners have in their wisdom removed the shoulder on left hand bends and hills. A few carefully chosen short cuts avoid the worst sections.

I have the ‘hammer down’ in the pouring rain and reach Cobh Cross in good time. I’m soaked and cold as I progress towards the West Ferry. The heater in the passenger waiting area has no effect and I am deparate to stop for lunch. Google Maps offers some suggestions, but I see a sign for an Italian Deli and Cafe. That’ll do. As I enter, all the customers go quiet. After a short pause a couple beacon me to join them. I sit and defrost over a lovely meal and delightful conversation. Ivan and Elizabeth leave to get back to work. I rise to pay, only to find they have bought my meal. Such a touching gesture I will never forget. I wasn’t expecting such a warm Irish welcome.

The hostel at Kinsale hits the spot. Meal, good company and the first round of the Champions League Semi-Final – Liverpool 5 – 2 Roma. I didn’t realise football was so popular in Ireland.  Liverpool being a favourite team.  The common room is packed with avid supporters.  I sleep well, contemplating the start of the Wild Atlantic Way, which I will follow, thereabouts, for the next 2,000km or so, to the Inishowen Peninsula at the very northern tip of Ireland.

I have no fixed destination as I set off in the direction of Mizen Head. I am getting ‘inside’ the journey now on Day 13 and try to relax into a steady pace. But this is a challenge. A familiar pattern of steep ascent (get warm); strong wind at the summit (get chilled); cold micro-storm (free cold shower or hail blast therapy); descent (dry off) repeats as I survey the stunning coastal scenery and powerful breakers around the headlands. I have recoded the Wild Atlantic Way acronym (WAW) to mean Wet and Windy. The dramatic scenery is what I have come for and the weather is a part of that. It is perhaps a notch or two more dramatic than my experience of the coast of England and Wales. 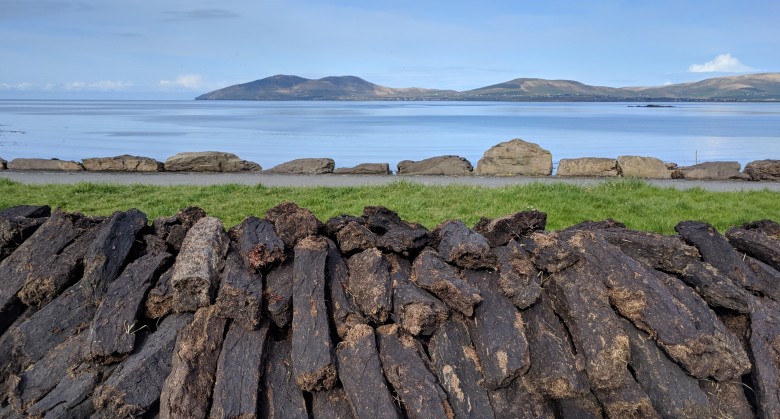 A SPAR attached to a local petrol station serves a great value meal deal, which refuels me for the next 20km to Skibbereen. The previous hostel hosts recommended I stay at Russagh Mill Hostel. It is delightful, wacky and welcoming. Multi-sex dorms are a first for me, but they work well and the conversation is stimulating and entertaining. Such a mixed diverse bunch of hostellers, but all with common interests and outlook. 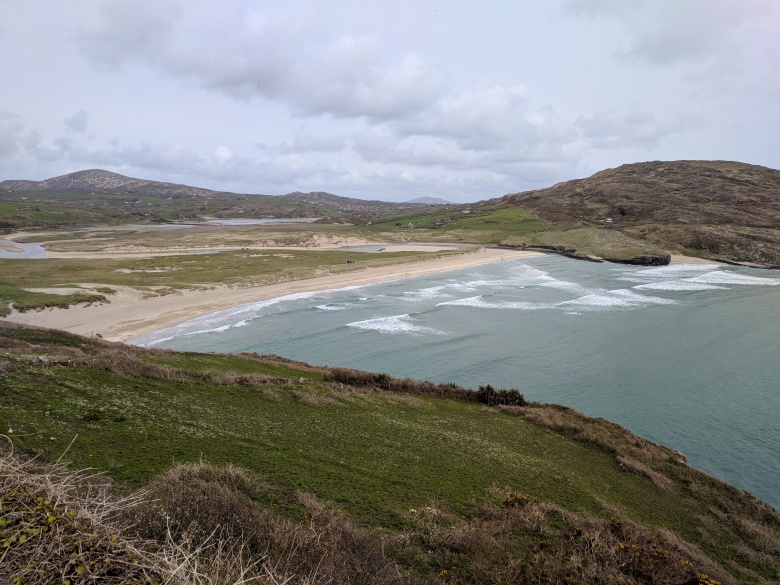 After a ridiculously large bowl of porridge I set off for Mizen Head. Houses have meteorologically themed names: Muckle Flugga; Rockall; Fastnet as I pass through Schull. Perhaps the Shipping Forecast would be a more reliable weather guide for the day. I sing to the seals in the bays to stimulate their curiosity. They follow me along the shoreline for a while and I slow down to watch them.

The cafe at Mizen Head serves a great fish and chips, where I meet two Spanish gents, cycling around Ireland.  They are taking it slowly, 60km a day, staying at B&Bs and travelling light.  I have a 100km target to reach and a campsite north of Bantry. 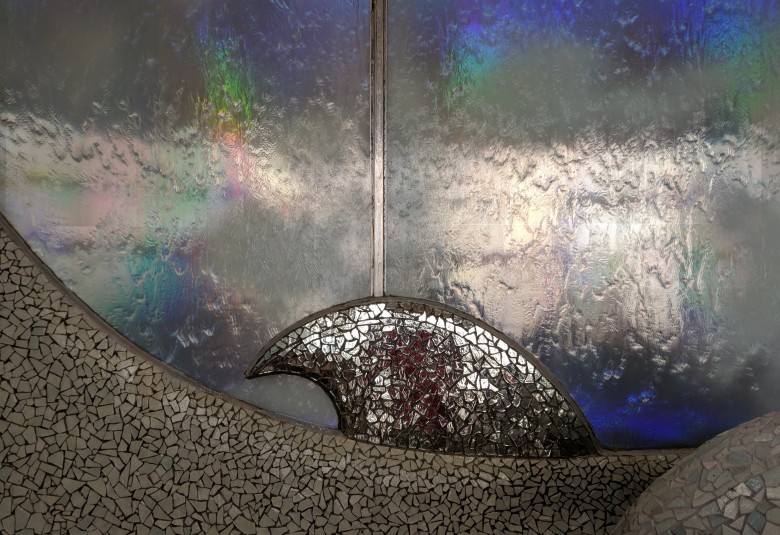 My chain is creaking badly so I seek out Donovans Cycle. Denis says it is not yet worn out and can only offer SRAM 10-speed chains as a replacement, so I will try further up the coast for the HG-X chain I prefer. This is where I learn of Mizen to Malin (M2M), the Irish equivalent of LEJOG. Denis completed this in 2 days a few years earlier. I Google it later – that’s at least 560km taking the direct route. I’ll be there in another in another 2 weeks! Some going.

The roads are busy into the Beera as fleets of white tourist buses pass in the opposite direction, each with their attendant guides holding microphones. Peg’s Shop at Adrigole makes a welcome stop, where she builds me a sandwich fit for a king (of the mountains).

I have to decide to cycle around the Beera Peninsula, which everyone has recommended, or cycle over the Healy Pass, which is also unmissable. I choose the latter, I’ll come back for the former another day. If I explore every estuary and headland on the west coast I’ll be in Ireland all year.

The Healy Pass is sublime. The ascent steady and remarkably pleasant. As I approach the summit, I can hear the exhaust notes of cars racing up the hill. These are not modern cars, but classic MGBs, Triumph Dolomites and a beautiful Mark I Cortina. I stop to video them, a BMW M5 follows up at the rear, just about able to keep up, surprisingly.  I chat to the owners at the summit and then set off on a rapid descent into Lauragh. The Thorn Sherpa handling as solidly as usual. I’ve eaten Peg’s sandwich before the fleet arrives a few minutes later, tooting at me as they continue their tour.

It is a long ride around Kenmare Bay to Castlecove and a basic campsite, but well positioned for the following days cycle around the Ring of Kerry. Up early to see and hear my first Cuckoo of the season, there is no other movement or sound to confuse my sighting on a still, clear beautiful day. The views are stunning as the Skelligs come into view, the jagged islands are a famous destination for Star Wars fans. The islands do resemble a crashed Battlecruiser from certain angles, but also a lonely place for Luke Skywalker to retire.

The zigzag ascent leaving Ballinskelligs is brutal, I only just make it to the summit without getting off and pushing. The descent into Portmagee is frightening. I try to resist braking, but the effect of gravity has me reaching speeds I’d rather not be travelling. The Swissstop brake blocks do their stuff until I stop for lunch where, by fortune, a resident tells me the Valentia Ferry is not running. The skies to the east are ominous, full of thunder, rain and hail, with a wind that draws me inland towards Castlemaine.

I head west again to The Strand at Inch, a proper meal and pint of Guiness. The views across a sandy arc towards the Macgillyguddy’s Reeks are straight off a Top 10 landscape photo competition. The tops are in snow/hail, a result of the micro-storms that drilled across the landscape today. This must be one of the best views in Ireland.

Slea Head provides rich possibilities for that photo essay. A gentle circuit from Dingle is a joy to cycle along on another glorious day. The views out across the Blasket Islands to the infinite distance of the Atlantic Ocean are as humbling as you will ever see. If you ignore the tourist traps and hire cars the natural coastline, beaches and sky scape are invigorating. All the more so for being on a bicycle.

I’m soon back in Dingle and loading up with carbs before climbing Conors Pass, a steady 6km, 14% ascent to a stunning viewpoint. The road is wide to the south, but unpassable to anything wider than a VW campervan to the north, so fleets of coaches and land yachts are thankfully absent. I am joined by local lad, Jonathan, on a racing bike, who paces me up the hill chatting away about a land he loves. The views of Mt. Brandon and the Irish coast to the north are wonderful. The descent tucks into the mountainside until leveling out towards Tralee and a comfortable campsite with a great kitchen/communual area. I meet Nouraddin, also cycling around Ireland, and share a ‘fridge clean’ meal made with anything we have left in our food bags. 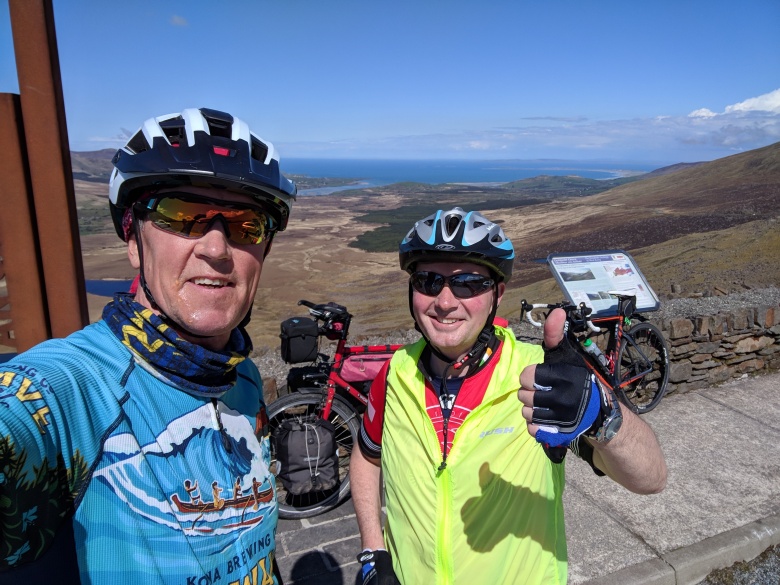 I pick out quiet lanes towards Tarbert to catch the ferry across the Shannon Estuary, stopping at Ardfert to buy a lovely pie. A quick calculation, considering variables of weather, ferries and accommodation suggests I stay at a campsite in Doonbeg before catching the ferry to the Aran Islands. The campsite is perfect, well run and full of character. I scoff a burger at the local shop, open on a Sunday, passing the time talking to contractors working at the power station during a 3 week shutdown.

The next day I cycle along the WAW, past the Cliffs of Moher, to Doolin to catch the ferry to Inisheer and Inishmore, two of the Aran Islands guarding Galway Bay.  Time for a half day break and relax before continuing on the northern section.