I was a delight to see so many cycle tourists waiting for the Islay ferry at Ballycastle.  Our bikes were loaded swiftly and we settled into our aircraft like seats and lifejackets. The weather was set fair we were all really looking forward to crossing the North Channel. 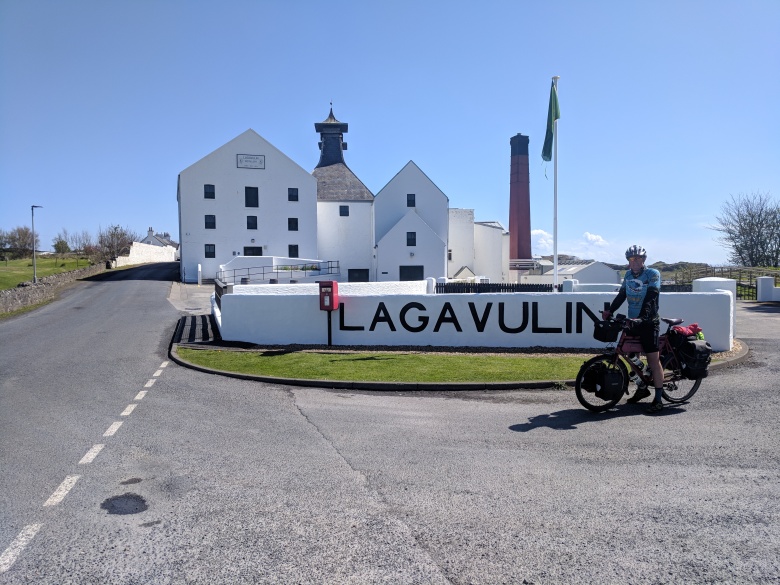 90 minutes later we disembarked at Port Ellen after a wonderful high-speed crossing in the powerful RIB used by The Kintyre Express service.  The winds are slight and the skies are clear as I set out to explore the distilleries along the south eastern shores.  Suitably refreshed I set off across an inland route to Port Aksaig to catch a late afternoon ferry to Kennacraig on the Mull of Kintyre. I dawdled gentle along the lanes in no particular rush to reach the terminal, busy with happy tourists delighted with the weather.  The Paps of Jura dominate the skyline. 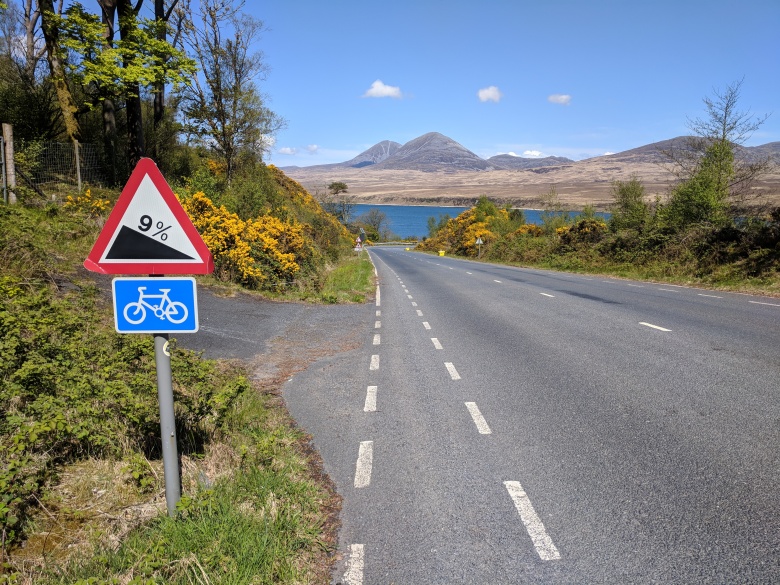 After a mill pond crossing, without any sightings of Dolphins or the like, I settled into a campsite in process of being constructed. Before I slept I noticed a delay on the CalMac  App to Barra the next day and calculated that I could make that ferry if I got up early enough.  The roads were excellent and a fresh tailwind saw me pushing a great average speed all the way to Oban, via the Crinan Canal and National Cycle Route (NCR) 78 in part.  I meet up with cycling friends I met in Ballycastle and after a good shop at Tesco before sailing to the Western Isles, we wait by the quayside in glorious weather.  At least 20 other cyclist join us, all resplendent in bikepacking rigs. 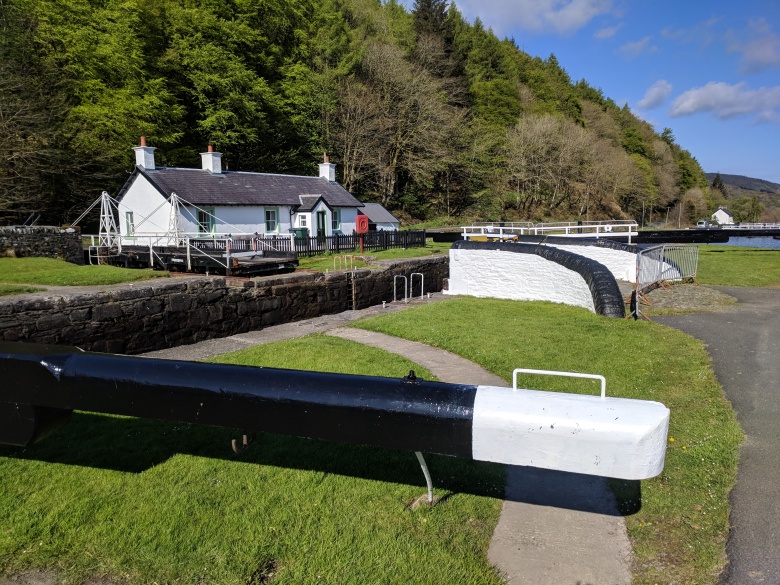 At last we saw Dolphins as we cross the Sea of the Hebrides to Barra, chasing the ferry bow waves in crystal clear water.  We dock and go our separate ways, some to wild camp on Vatersay, some to stay at the hostel.  I camp further up along the west coast and rest well, to be woken by Sandpipers in the early morning. I’m now on the Hebridean Way (aka NCR 780).

I wasn’t expecting to reach Berneray, but after a ferry to South Uist and a lovely fresh tailwind to North Uist, my progress is swift. 120km later I’m walking into the Gatliff Trust hostel to grab the last bed and join an eclectic and diverse bunch of fellow travellers. We have a couple from Alaska, walking the Hebridean Way, with a baby; several German hikers; cyclists from all over Europe; and two Scotsmen, engrossed in trying to complete a 500 piece jigsaw.  The convivial conversation carries on late into the night. 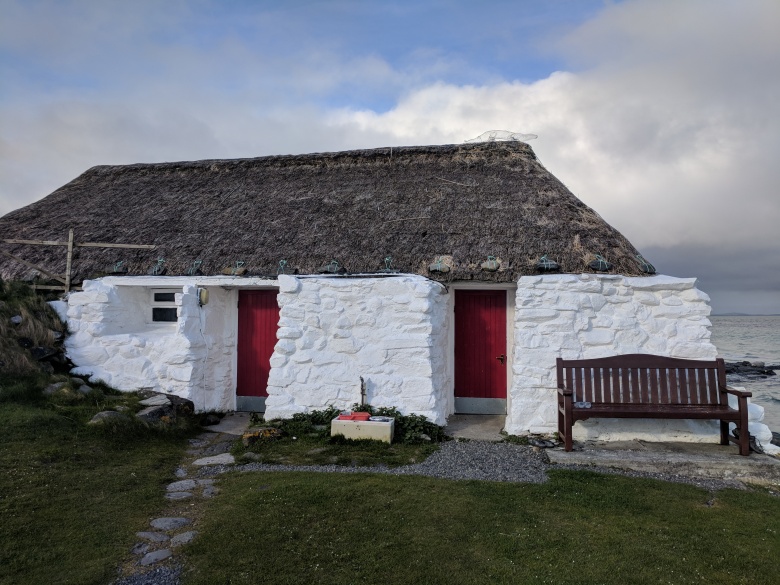 I’m up very early to catch a ferry service constrained by spring tides to reach Harris.  The weather has deteriorated but the wind still assists me as I tackle the rugged and mountainous terrain of the island.  The mist and light make for eerie views along the beaches, where sea and sky merge into a landscape that defies orientation.  I am soaked when I reach Tarbert, which doesn’t have a welcome I’d expect other than a burger van and queues of tourists waiting for the Skye ferry.

Today is going to be tough and the ascent of An Cliseam is draining in the mist, wind and rain.  I’m on maximum LED illuminations, which do an effective job of signifying my presence to passing motorists.  My progress is good until I reach the A858 and have to cycle into the westerly.  I could do with drop handlebars as I pedal forever to reach the Standing Stones at Callanish.  I aim for the Blackhouses at Garenin, knowing they have a possibility of a dorm at the hostel.  I’m in luck and take the last bed, joining mostly German students and two Scots girls, again mixed-dorms.  The hostel looks ancient from the outside, but too modern inside, complete with a remote control peat effect fire! Somewhat different from the original and utterly uninspiring. 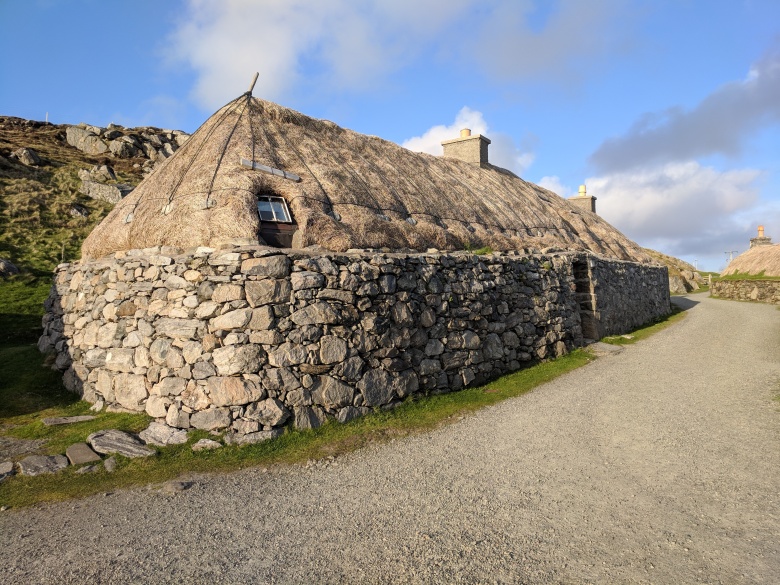 I should really be exploring the area, but I already know it well from previous trips in a campervan, so I know what I have to cycle the next day to reach the Butt of Lewis.  Wind assisted again I reach the end of NCR 780 and The Hebridean Way before midday and join other cyclists enjoying the sense of achievement of reaching such a remote and wild part of the British Isles.  Malin Head seemed wilder, but I am sure this headland sees some amazing storms, judging by the proliferation of cricket ball sized stones flung onto the fields above the cliffs. 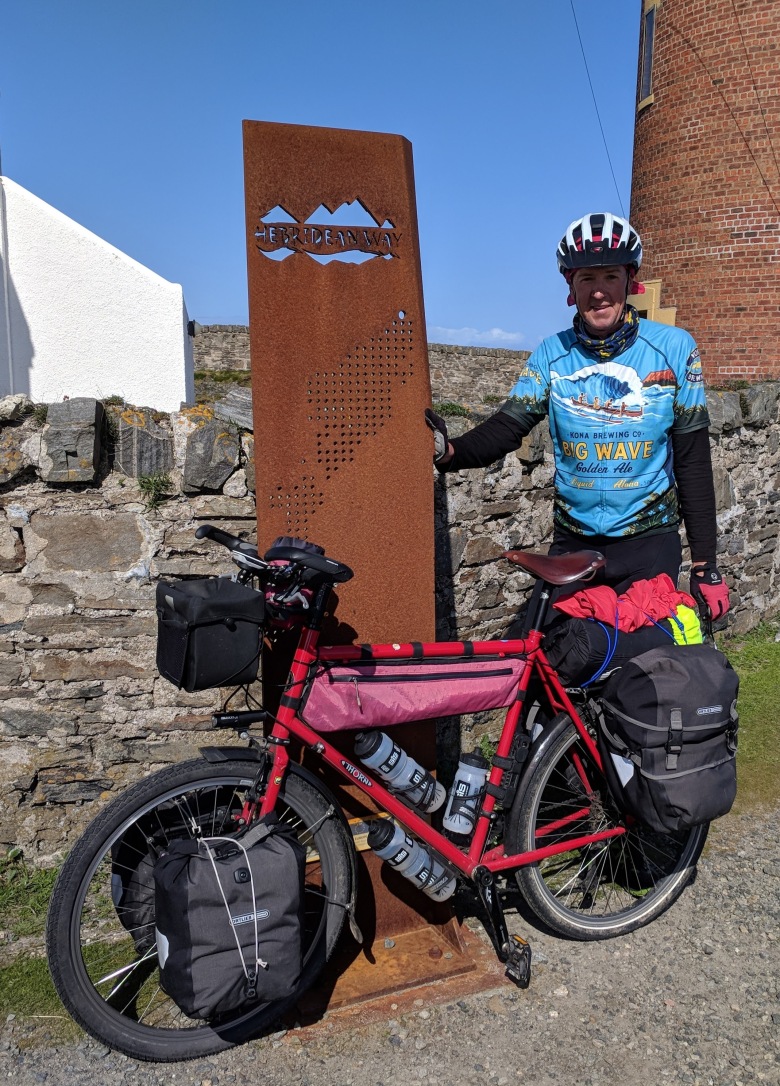 Now I have to cycle into the wind to reach Stornoway and the Heb Hostel.  I stop for a lovely Black Pudding roll at a local shop and steady make my way across the moors into the town.  I need new brake blocks and find a friendly cycle shop before checking in early to camp at the hostel.  I meet David and Jess, also cycling around the coast. 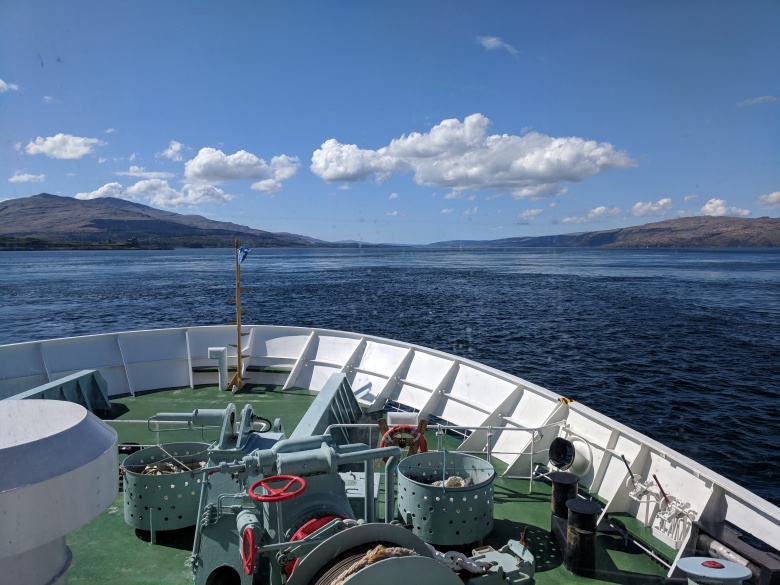 All 3 of us are up early, woken by the screeches of the Herring Gulls, to catch the 07:00hr ferry to Ullapool.  The crossing is another mill pond smooth affair, keep eyes sharp to see the wildlife.  On leaving the port the coast of the Western Highlands is so clear I think we are sailing the wrong way.  Ullapool is basking in glorious sunlight as we dock.  I decide to take a rest day and service my bike, together with a good scoff at the Seafood Shack.  The evening is completed with a Ceilidh, which only the locals know about and are hesitant to publicise.  The band are superb and the songs resonate with a weary traveller. 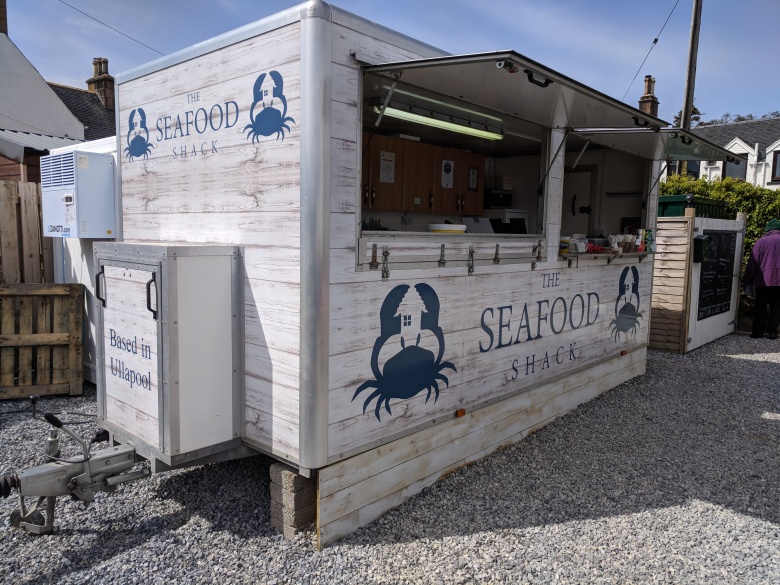 I’m in no rush the next day to reach Scourie, meeting another cyclist en route, who has suffered an infestation of ticks, when wild camping the night before. We camp together and I keep a safe distance while he goes through all his gear, squeezing ticks out of his sleeping bag and tent.

I’m up early again, to avoid the worst of any traffic on the North Coast 500 (NC500) and make good progress again with a nice tailwind into Kylesku, stopping at the Rock Shop for a bacon butty and an education about the formation of the mountains I have been cycling through.  The West Highlands Geopark is a geologists delight.  The exo-planetary landscape continues all the way to Durness.

The Cape Wrath Challenge is in full swing and I struggle to keep up with the runners as they ascend the hills.  I though a bicycle was supposed to have a mechanical advantage, but these guys are seriously fit.  I contemplate taking the ferry to Cape Wrath, but I’m close to finishing the route now, so continue over a long day to Melvich and an expensive campsite, struggling to cope with the NC500 popularity and adjusting supply and demand through price. 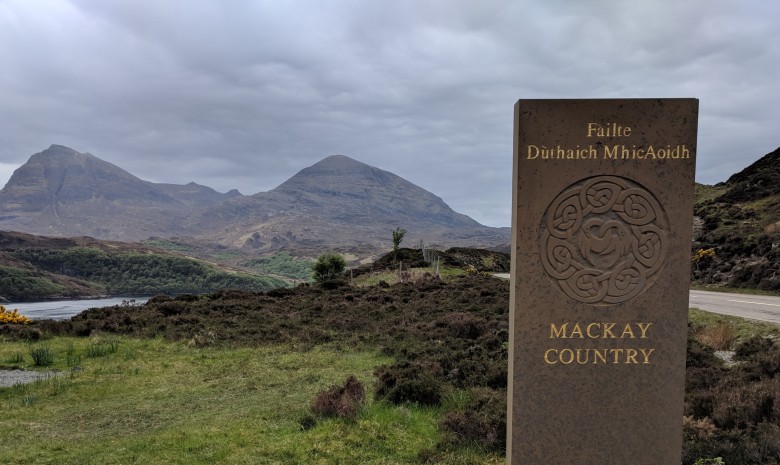 It dawns on me that I will reach John o’Groats tomorrow and knock off the last miles with ease on a quiet Sunday.  The finishing post is deserted on this overcast day, so I take a few selfies and treat myself to a burger from the wonderful van parked below.  The Pentland Firth is boiling over as wind competes with tide.  A quick look at the forecast suggests I cycle into Wick that day and camp, rather than endure heavy rain tomorrow. 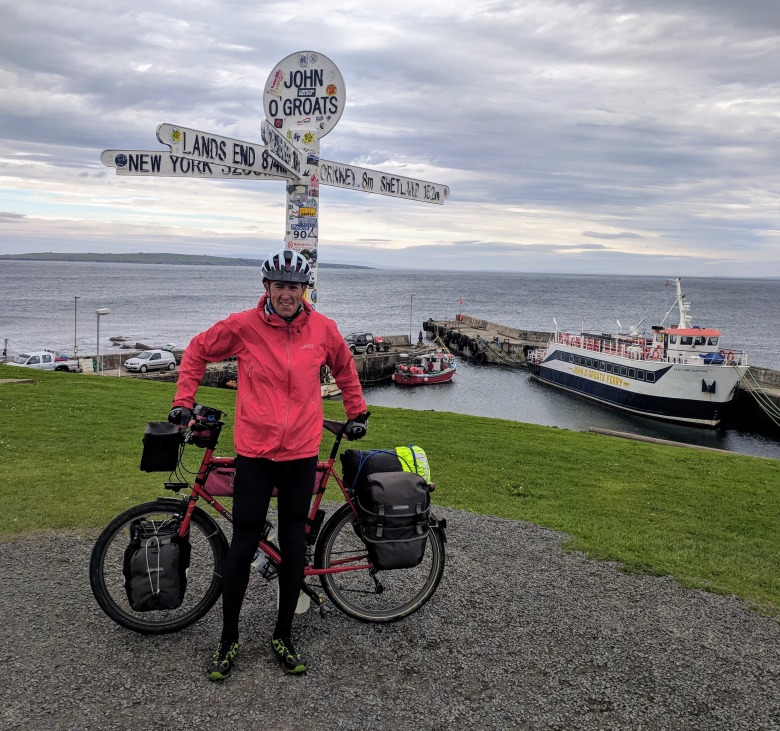 The campsite at Wick is wonderful and I rest easy before catch the train to Inverness to wait for the sleeper service to London.  Plenty of time to reflect on the Atlantic Seaboard Journey. I have now completed this route and the North Sea Cycle Route (Eurovelo 12) covering some 10,000km.  I feel all the better for it and start to think about the next adventure.